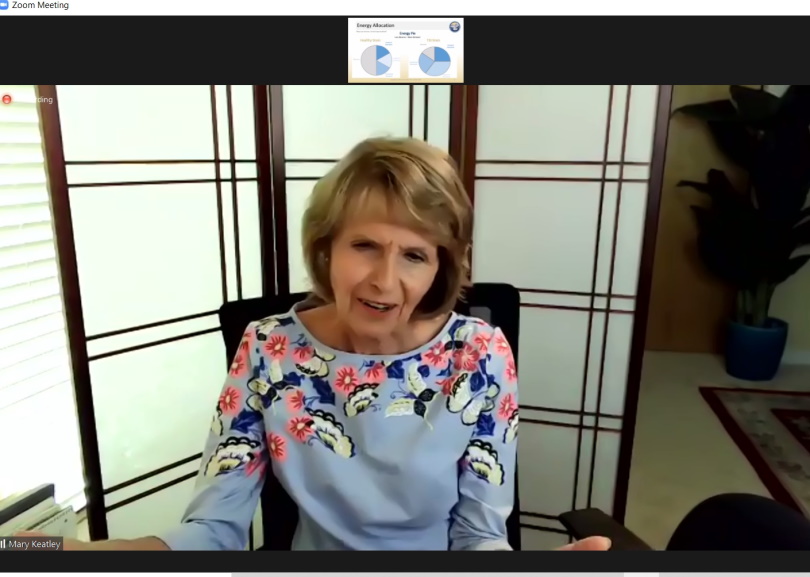 We’ve all experienced exhaustion: When we are so tried after a long day we just collapse on the sofa, lacking the energy to take a shower or even to eat. Now multiply that by 10, and that’s what a majority of brain injury survivors go through day in and day out.

“It takes more energy to do everyday life tasks after a brain injury – like getting dressed, brushing your teeth, and eating breakfast because it takes energy to process the food,” Keatley said. “The mental fatigue is real, even years post injury.

“People can’t return to work or socialize, or have the ability to pay bills. Your quality of life becomes affected,” she explained.

One of the first things Keatley recommended is to have your doctor take a look at thyroid functions.

“I’ve looked at the literature very carefully, and there are a lot of molecular changes that take place after a brain injury; 25 to 50 percent of TBI survivors have thyroid problems after an injury,” she explained.

Another important factor in addressing fatigue is to determine what TYPE of exhaustion you are experiencing:

“Your brain is like a camera shutter,” Keatley said. “It opens and closes, but after focusing intently for a while your brain shuts down.”

Thus, you shut down. That is why it’s important to figure out what you can do to avoid a total crash. 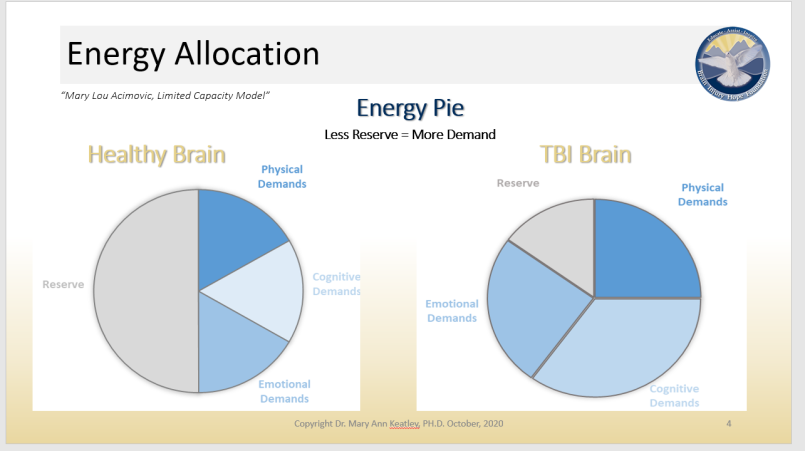 “It’s very emotional; you are not who you were before the injury, and that also takes a lot of energy to understand,” Keatley said. “You have to change your life for a to period of time manage your life. So, what can you do? The first thing to do is to start with pacing.

“There’s a technique called the Pomodoro – Italian for tomato,” Keatley explained. “A gentleman used a timer on the stove that looked like a tomato. He would set it for 25 minutes and do a task, then rest for five minutes. The he would set it again, and rest for 10 minutes. … It’s been proven that we are better able to do more by this method than powering through.”

Another method is to assess energy by giving a task a percentage of your total energy for the day. For example: grocery shopping takes a lot of energy because of the fluorescent lights, the sounds and the overwhelming choices. So grocery shopping might be all that you do that day. Plus you can minimize the energy task by taking precautions, such as wearing ear filters, dark glasses and a wide brim hat.

Organizing daily tasks can become so overwhelming for a TBI survivor that nothing gets done. You know that pile of mail that keeps growing, or those files that need to be sorted or those emails that have to be read and answered. The piles keep getting bigger and bigger, and the tasks now seem insurmountable.

Keatley suggests using the Eisenhower Method, which is named after Dwight D. Eisenhower, the 34th president of the United States. To tackle his daily tasks, Eisenhower would categorize them into four priorities.

“After a brain injury all tasks seem to hold the same weight,” Keatley explained, “but by putting them in categories you don’t become so overwhelmed.”

Trouble sleeping is a prevalent and persistent problem among survivors of brain injuries, and sleep-wake disturbances are often is undiagnosed and under-reported.

Biochemical changes in the brain are one cause of sleep problems, as Keatley noted TBI survivors tend to produce 42 percent LESS melatonin than the normal population.

“I would hear from so many patients that they would wake up at 3 a.m. and never go back to sleep,” Keatley said.

Some ways to tackle sleep issues are:

Wearing blue blocking glasses at night and using the blue light filters on your phone and computer can help with sleep disturbances. Sitting in front of a  blue light lamp, such as the TaoTronics Light Therapy Lamp, in the morning can also help reset the circadian patterns.

“Blue light therapy reduced fatigue significantly in people with TBIs,” Keatley said. “It was more effective doing it in the morning by giving people more energy and less cognitive fatigue.”

Warm foot baths for 30 minutes one to two hours before bedtime decreased the waking time of TBI survivors, Keatley said. And setting the bedroom temperature a little cooler than the rest of the house  and limiting alcohol consumption are some other suggestions to help you get a good night’s rest.

At the end of the day, fatigue management is one of the best ways to battle exhaustion after a TBI.

“Pace yourself,” Keatley said. “When you have cognitive fatigue, stop what you are doing. Don’t push yourself. And ask for help. For some people it’s kind of a gift for them.” 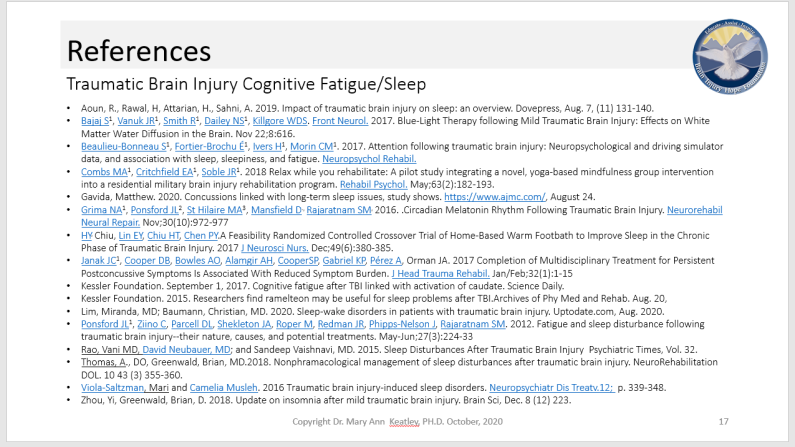