Survivor Panel: Resiliency and Moving from Struggle to Thriving 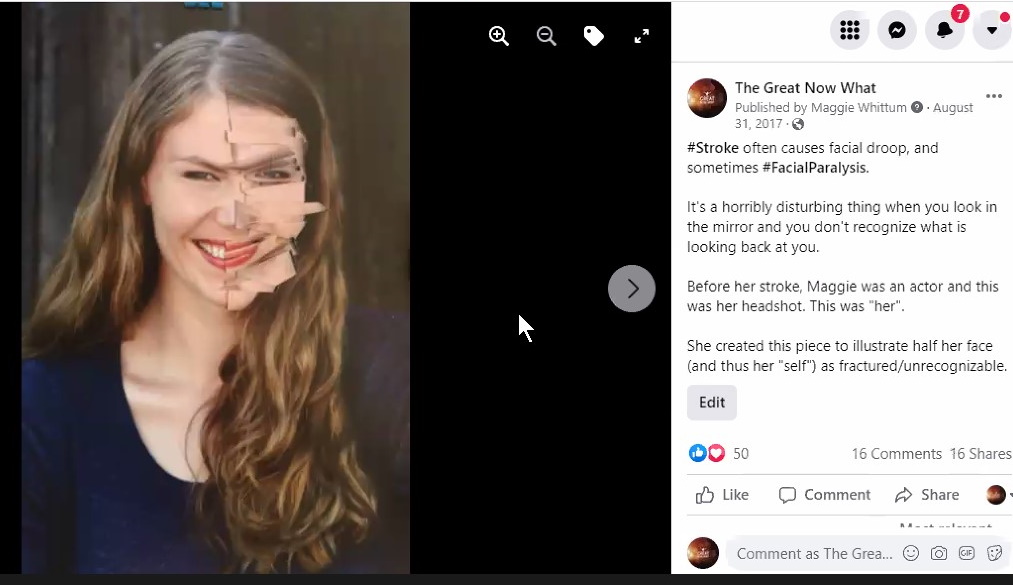 Maggie Whittum uses art therapy to help in her recovery from a stroke. This is a self-portrait she created to show half her face as unrecognizable.

Survivor Panel: Resiliency and Moving from Struggle to Thriving

Just as no two traumatic brain injuries are alike, so too are the recoveries from TBIs, along with the paths in which the brain injuries will take you.

This adage was evident at the Brain Injury Hope Foundation’s  Survivor Series: Resiliency and Moving from Struggle to Thriving on January. 14, 2022, as the panelists revealed their different paths to a thriving life after a TBI. 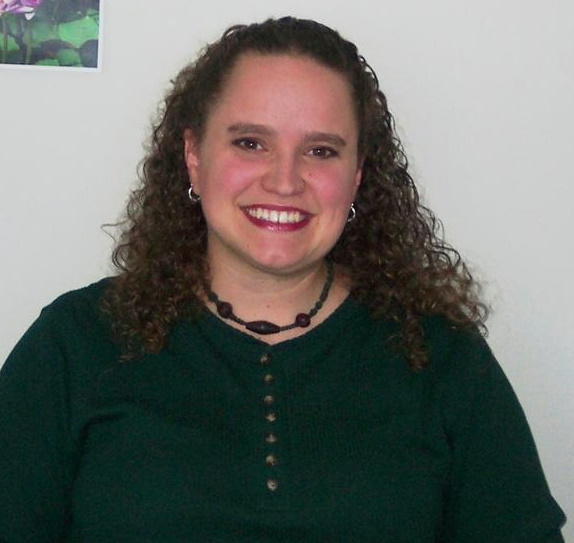 Sharon Mehesy uses poetry to help her recover from a TBI. See her poem “Emergence” below.

Sharon Mehesy discovered a “change of perspective” after her second car accident.

“After the first car accident I was extremely depressed and angry,” Mehesy said. “What pulled me out of it was another car accident. It was a wake-up call. I call it a gift of perspective shift – I can’t run, but I can walk; I can’t sing, but I can talk.”

She described how she realized being angry took up so much of her energy that she made a decision to either give energy to the anger or to give energy to a better life. She stopped focusing on what she lost and focused on living life.

“The injury was the most amazing thing in my life,” Jose Reyes said. “A nurse told me this is going to help you live in the present. Before I was living in the future or the past.” 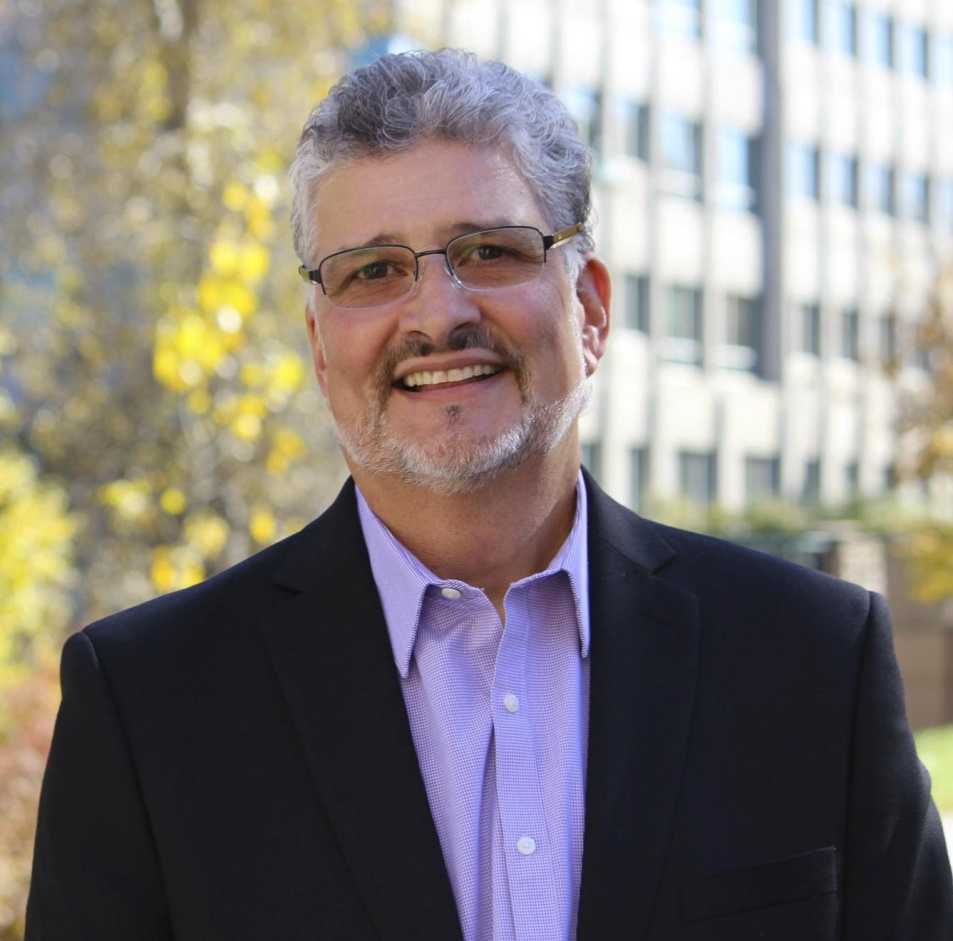 Before a cycling accident Jose Reyes was always on the go with his work as a consultant. Now he lives in the present and enjoys helping others.

Reyes suffered a head injury after a cycling accident and spent more than three months recovering in the hospital. Before the injury he ran his own consulting business and traveled extensively – always on the go. Now, he’s a mentor and a volunteer for a hospital and epilepsy foundation, and a board member of a community hospital.

“I enjoy helping people, and I continue to work on myself,” he explained. “People say, ‘Oh you look fine,’ but my memory is not well … I’m in recovery now, and will be the rest of my life.”

Maggie Whittum was working five jobs before a stroke changed her life. She was engaged and in graduate school then “out of now where” she suffered a major brain stem stroke. She was in intensive care for 16 days and in a wheelchair; she suffered facial paralysis, vision difficulties and nerve pain. Now? She’s acting again and making a documentary film, “The Great Now What.” 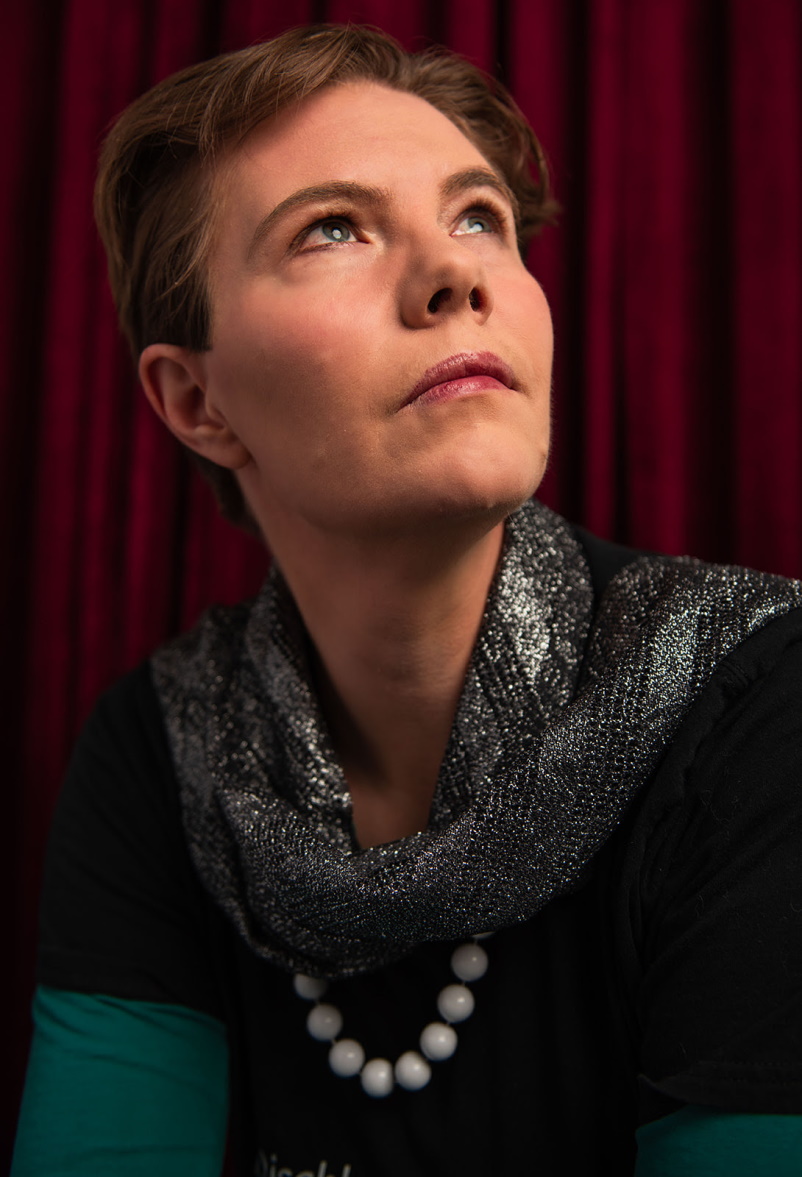 Maggie Whittum was working five jobs before a stroke changed her life. She is now working on a documentary, “The Great Now What.”

“I was driving all over the city from 9 a.m.-9 p.m. When I look back in retrospect it was ridiculous,” Whittum said. “In the culture we live self-worth is tied to productivity. I had to reframe that in my own mind — that I was not a bad person because I couldn’t work like I used to. I had to get to a new mental space.”

Kevin Thompson was an iron worker and fractured his skull after an injury at work. “I had to relearn to walk; I had balance issues, memory issues. I tried to go back to construction work in 2000, but it was very difficult for me. I had to reinvent myself.”

Thompson said he realized a work-life was not about money and turned to social work at a mental health center. “It’s about being fulfilled,” he said. “You have to reframe what you are trying to accomplish.

“It takes a lot of work to recover from a brain injury,” he continued. “We learn to preserve. We are more resilient than the average person. There are a lot of obstacles to overcome. We are always reinventing ourselves.” 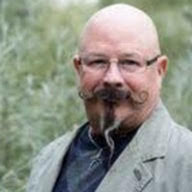 Kevin Thompson says TBI survivors are more resilient than the average person because of the obstacles they have to overcome.

BIHF Vice President Joanne Cohen agreed, “We have to reframe and recalibrate.”

Mark Palmer said he has reinvented himself “at least three times.” In 1964, Palmer was in a car accident and suffered a severe skull fracture that doctors told his parents not to have “high hopes” for his recovery.

“My family was so grateful that I survived that there were no expectations, no rehab,” Palmer said. “I had to move out to have the energy to survive. From that day on I saw the brain injury as a gift. … I decided to make life positive for me.”

Mark Palmer wrote “Realistic Hope.” Kevin Pettit wrote “Rambling Down Life’s Road.” Sharon Mehesy penned “A Likely Story.” All the books detail what it’s like to survive a TBI and are a way to help TBI survivors in their recovery.

Palmer, who is married with two children and grandchildren, said, “I try to help people see the positive side of the injury and to rise above. … We know the tricks of how to overcome. My energy is to give back, and to give TBI survivors a little hope.”

Kevin Pettit was a college professor of physics before a car accident left him in a coma, and his family contemplating removing him from life support. He spent five months at Craig Hospital and started teaching physics again, but was let go.

Kevin Pettit, a former college professor, is now a minister

Pettit found his calling by earning a master’s degree in Specialized Ministry and by starting a ministry, Faith4All, which works to help foster “disability inclusion evangelism in faith communities of all natures.”

“Now I’m a minister and a community organizer,” Pettit said. “I enjoy it. I feel like I am doing good. The hardest part for me was letting go of what I was and had.”

Mehesy credits her psychotherapist for helping her through the grief and loss that people experience after a TBI. “She really led me through murky waters,” she said. “You have to acknowledge there is grief. You expect to grieve after a death. With a brain injury, we didn’t die. It’s confusing, and we will continue to bring up those things that we lost.”

Reyes continues to work on his memory and has found success working with a speech pathologist, who gave him homework with words. “It was a little frustrating, but I recognized how very instrumental it is to cognitive skills.”

Whittum uses art therapy and meditation to help her recover.

“Art is a way to express yourself and get emotions out,” she explained. “The mental challenge is so much bigger that we account for – we are trying to figure out who we are as a person.”

Whittum used Barbie dolls to help her explain some of what she was going through and what her body felt like. “Your body is so different, and it’s scary. (Art) felt so cathartic. … There was so much going on with myself, my soul, my spirit. Art therapy was a great way to help me through it. It helped with grief and acceptance.” 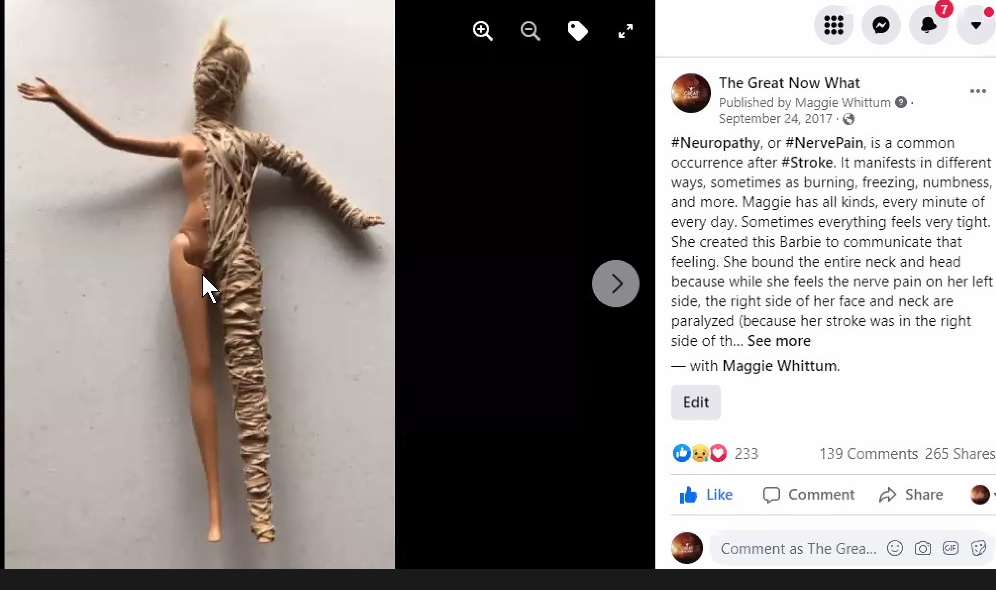 Maggie Whittum created this art using a Barbie doll to show what it is like to live with nerve pain.

Along with art, meditation is now a way of life for Whittum. “My brain was misfiring all the time. I was hyper stimulated. Meditation calms me down.”

Pettit used music therapy and started singing after his TBI. “It brings me joy, and I’m making some money singing.” He also said taking classes and continuing his education helped with his recovery. “It keeps your brain active.”

Each panelist noted that a healthy diet is a key ingredient to recovery. One thing to keep in mind is that after a brain injury gaining weight is a common occurrence with the normal being an extra 30-40 pounds.

Mehesy said she struggles to remember to eat. So, she relies on almonds for a quick pick-me-up, and she sets an alarm to remind her to grab a bite to eat. 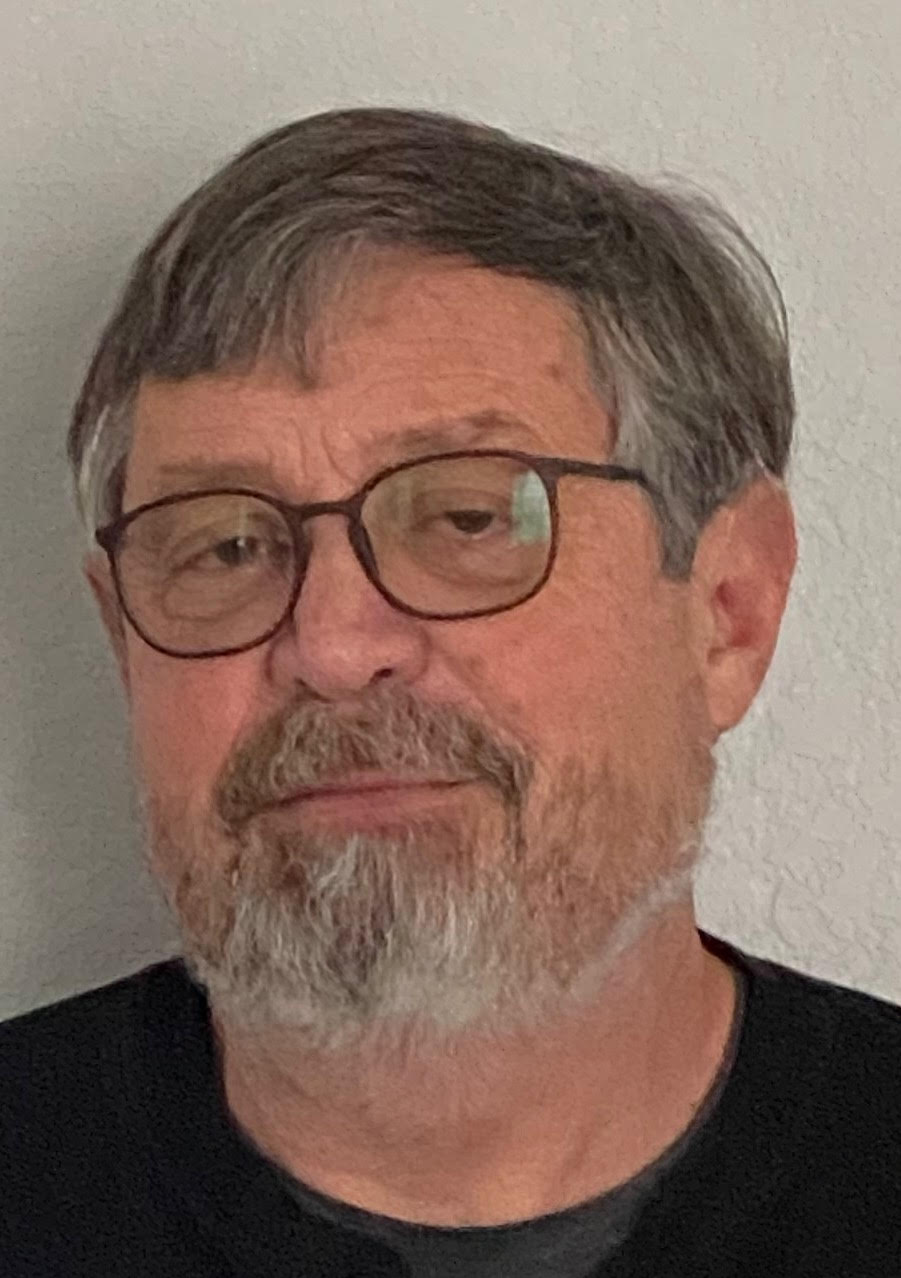 Mark Palmer urges TBI survivors to ““Be yourself and be proud of who you are.”

At the end of the Survivor Series each panelist gave their “words of wisdom” or tips for TBI survivors.

“Be yourself and be proud of who you are. You don’t owe anyone any apologies for your injury,” Palmer said.

“The most important thing is your spirituality and your relationship with God,” Thompson said.

Mehesy, who writes poetry to help in her recovery, explained that it took her about seven years to change her perspective. “I started seeing it (brain injury) as my rebirth. Now, I have two birthdays a year.”

Whittum urged TBI survivors to be kind to themselves. “Be kind and mindful of how you speak to yourself.”

Rising out of the ashes

Not the old, yet not completely new

Traces of the former

Enhanced by this all-consuming transformation

Arise and step boldly forth

Seasons: A book of poetry reflecting on the Seasons of Life by Sharon Mehesy