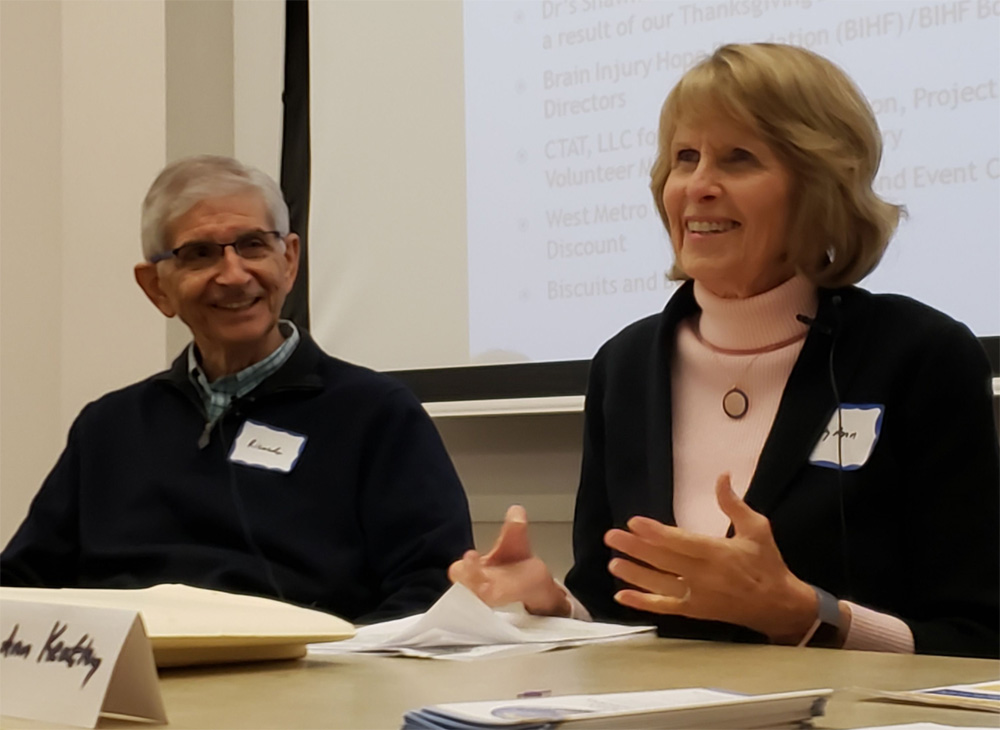 Relationships with our spouses or significant others are often described as intimate. However, these connections can also refer to interactions with your parents, siblings, caregivers, friends, and coworkers. Intimate relationships differ from acquaintances in that they are consensual relationships where people reciprocate deeper feelings of trust and understanding.

Intimate communication is often strained after a person suffers a mild TBI. However, there are ways to smooth the rocky road as Dr. Ricardo Esparza and Dr. Mary Ann Keatley explained during the first installment of the 2019 Brain Injury Hope Foundation’s Survivor Series, “Demystifying Relationships, Communication, and Intimacy after a Brain Injury” on Feb. 8, 2019. The event, which included a free lunch, was held at our new location, West Metro Fire Rescue Training & Event Center (Kipling Street and West Hampden Avenue) in Lakewood, CO and was sponsored by the Spalding Hospital Volunteer Association.

“Relationships are not always the same after a brain injury,” said Keatley, who co-founded the Brain Injury Hope Foundation (BIHF.) “Major changes come up often following injuries. To adapt, you must learn to walk one step at a time in problem solving issues and identifying hope. No one size fits all.”

Unfortunately, relationships are one of the last things to be addressed by doctors or rehab practitioners after a patient suffers a TBI.

“Often providers do not acknowledge or address the injury’s impact on partners, spouses, significant others, moms, dads,” Esparza said. “Nonetheless, one has to develop an attitude of resiliency since you are not by yourself and others can be found to help you modify any tendency toward isolation.”

After a TBI, “some describe themselves as if they have lost an image of their former self.” Esparza said. “There is a loss of who you were, and now, your

partner is also frightened because he or she does not recognize you as the person they knew. Some spouses have even voiced that the reality of the injury, and its uncertainty, is something they did not sign up for.

Similarly, they often ask: How can I understand a TBI if I don’t have one?

Yet, “we are all in this together,” Esparza said. “And, there are ways through this life change by speaking honestly without defaulting to shame or guilt.”

Communication is key. Sometimes, the significant other just needs to hear that you ARE really trying to get better. An example is “to talk about why you don’t want to go to family gatherings; is it because you can’t tolerate the noise level?” Keatley said. “Most important, talk about what accommodations need to be made.”

Esparza said a “discovery process” must take place with your doctors and significant others, the ones with whom you have developed trust.

“It’s easy to find problems,” he said. “But it’s a challenge to find out what you are going to do to solve the problems to get better. Take heart that, it is amazing to see the resiliency people have when a light turns on inside of them.”

Sexual Relationships after a TBI

More research needs to be done on sexual intimacy and relationships after a TBI, Keatley said, “A major barrier is highlighted by one study that cited 79 percent of practitioners and therapists who treat TBI patients said sexual relationships are just as important as any other therapy. However, only 9 percent of rehabilitation providers felt comfortable talking about the subject or finding a path to recovery.

Other facts Keatley cited about survivors of TBI:

In the midst of these challenges, she highlighted that there was some good news for couples when one partner has suffered a TBI: three out of four couples remained married; older couples and those who had been married longer were less likely to get divorced; and, divorce rates were much lower than the general population. For more information on the studies and the seminar handout, please click here.

One of the first experiences that can happen after a TBI is a period of mourning associated with the losses or forced changes experienced by the patient and significant other. Grieving is intensified because there is no certainty about a resolution.

“Soon after the TBI, there may be a loss of self, social connections and life purpose” Esparza said. “Suffering intensifies with an inability to perform work as in the past or to feel a sense of life control.

“Survivors feel alone, and they are very frightened,” he continued. “It’s very hard for some to fully comprehend a TBI and confusion continues when couples do not talk about the injury and its consequences.”

For the caretaker, there is the immediate challenge of meeting one’s personal needs and the fear of uncertainty. Added to the strain, some doctors have seven minutes to address issues. At a point, you have to become an advocate for your relationship. You have to make a shift from feeling like a victim to focusing on those things you can control.

“For some, there is intense sadness. So what can you do?” Esparza stated. “You start by acknowledging it. Bring it up for conversation. Recognize that you can’t change what happened. Remember, recovery is not a race and keeping busy with practicalities will only delay adaptation and change.

Keatley reminded participants not to discount simple affirmations, touching or just daily reminders of hope as crucial to relationships, Both Esparza and Keatley noted that it is very important to highlight the effect of chronic pain, trauma and mood issues with rehabilitation specialists in an effort to find help or support for the relationship.

Keatley stressed getting your hormones tested as soon as possible after a TBI, citing a study in which a number of young women experienced changes in their periods and ovulation cycles after a TBI. Men also need to get tested because the thyroid and pituitary functions may have been affected by the injury. Dr. Keatley stated that 28-68% of individuals have problems with hypopituitarism following an injury and this can cause muscle weakness, fatigue, problems thinking, communication problems and hormone deficiencies, etc.

As a speech-language pathologist, she also stressed that some survivors of TBI cannot think of words to say and some can’t initiate speech, while others don’t understand inferences, such as jokes. These communication problems can affect intimacy and cause greater isolation.

“In order to understand communication, you need to have working-memory and be able to listen, understand and process conversations,” she said.

No. 1 Fear. You may be afraid. Your partner, parents, and children are also afraid.

No. 2 Anger. Anger can be a disguise for fear. Look behind the anger, its presence can be a magnification from previous disappointments or future uncertainty. Decide if it is your issue or a relationship issue, and get some help.

No. 3 Depression. This emotional reaction certainly presents during the process of recovery. Esparza said, “It’s not just the biological aspects of the brain injury after an accident; but depression can be magnified by chronic pain, trauma and life stressors.” Social isolation is often an aspect of depression and can contribute to communication difficulties with the caregiver.

While all want definitive answers about TBI recovery, survivors and caretakers must develop the skill of distinguishing the difference between possibility and probability regarding improvement.

Part of the challenge is that you have to get the right information, realize that you are in a period of transition and need to provide mutual support as couples.

As a survivor, you MUST use your energy to focus on the positive and what you can change. Don’t waste your precious energy on taking on negative energy from others.

However, with a change in thinking, you can regain a sense of wholeness and deeper connection with your partner to regain a meaningful life together.

“It’s OK to rethink your life. Reframe it,” Esparza said. “And think about how important it is to invite someone into your life to walk with you. Remember that it is important to allow others to share their compassion with you on this life journey.”